The album ‘TAE’ is a bold attempt at musical integration. A work of sweeping evolution, it’s a record that rewards repeated listens, allowing all the fresh and disparate elements to rise to the surface on a project that underlines songwriter and producer InNeon’s role, as one of Canada’s most interesting and impressive electronic music creators in the underground scene. His fusion of club tropes, down tempo songwriting techniques, and gorgeous cinematic production elements makes for a thrilling set of songs. All of which are fronted by a selection of top class vocalists who add luster to an already shining album.

‘TAE’ incorporates an array of singing collaborators and a new thirst for modular synths alongside other core InNeon elements, for an experience that is as much futuristic as it is retro in its sonic vision. The album flows like a river, full of different tracks that will captivate listeners. It is dance-ready, uplifting, thought provoking and drenched in lushness. There’s a strong emphasis on how the rhythms and the instrumentation meet with the vocals.

‘TAE’ is InNeon’s strongest record yet. It builds on the foundations of the works preceding it, for what feels like his most emotional, poignant and expansive record to date. ‘TAE’ is filled with staggering euphoric peaks and smooth downtempo soulfulness creating a natural ebb and flow that feels both prominent and engaging. “Awake” ft. Lexi Johnson is an exciting and vibrant opener, built around deep bass notes, twisting synths and haunting vocals. 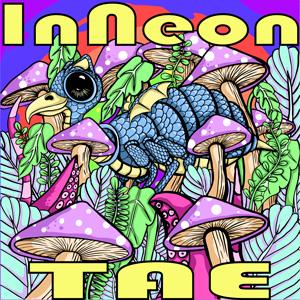 “Stay” ft. Alicia Orozco takes a step backward into an 80’s time warp with a beautifully orchestrated ballad filled with aching guitars. The keys and strings keep layering and harmonizing on top of each other to create a sound that is particularly hypnotizing.

“House Of Cards” slides into a understated groove with shimmering keys and easy on the ear vocals, before introducing an absolute album highlight, with the synthwave flavored pop of  “I’m Not Ready” ft. David Luke. Track after track, InNeon brings together a mix of sonic influences, compiling fiery beats and an array of fresh musical concepts based on genre legacies and tropes.

“I Know” ft. Erisse is where InNeon creative strengths are realized. Where one may expect the dance grooves to grow tiresome and predictable, they prove engaging. The elegant vocals lift the song to a higher level, awarding it a favorable frizz.

“Lost In The Blue” ft. Martha Goddard practically reaches through your speakers to gently caress you as well as lead you to the powerhouse mid-tempo synthwave ballad “Run” ft. J&D. This will have you cranking your high-end stereo and putting the track on repeat immediately.

InNeon closes the album with the understated dancefloor banger, “Wonders” ft. Alicia Orozco. The sultry melody and momentum pushing synths manage to grab hold of you and never let go, and for that alone, this is a recommended listen for any and all.

All throughout this album, InNeon breathes fresh air into the electronic genre by blending the old with the new and pairing his synth-driven sounds with that of the stunning vocalists featured in each of his tracks. Driving beats help keep everything focused as InNeon lays down lush arrangements that help maintain an infectious and energetic mood.

Save
Tags: EDM, Electronic, I’m Not Ready, InNeon, Lost In The Blue, TAE