“Crime Story” is the first single promoting upcoming Snakedoctors album. “Four” will be out in late spring of this year. Snakedoctors have used electronic instruments for a while now which definitely can be heard also in that song. It’s heavily inspired by early 80’s new wave heroes. It’s a song about dark side of life. The fourth Snakedoctors album will be even more diverse than previous albums with anything from songs like “Crime Story”, new wave, dark wave, shoegaze and grunge. 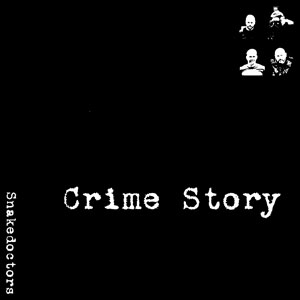 Snakedoctors are four friends who started the band in Gdansk, Poland in May of 2020. Since then they released sixteen singles (including a Christmas special and a song in Czech under name Jiri Blaha & Framuga Boys) and three albums: „Obligation”, „Joy Free Bowl” and „Mellow Joy”. All singles charted at Poland iTunes Rock Top 100 (many of them reached number one), one of the indie radio charts in the UK (including two number ones – „A Song” i „Tinder Girl”) and other radio charts in the US, Columbia, Ecuador and Peru. Their biggest hit single so far – „Close That Door” has been a number one for over 20 weeks at Raga Top Radio Olsztyn. Another one – „Got Him Another Girl” reached number one at radio airplay chart for Central America. As before the band managed to get to cooperate many well known producers. That includes not only the regulars from Abbey Road Studios and Metropolis Studios but also new ones who are known for their work with bands like – Depeche Mode, Yazoo, The Cure, The Mission, The Kinks, Jane’s Addictio or David Bowie. One of the band members used to play in bands in the US during his college years. As they say – they play music because it’s fun. They’re an indie band releasing their music on the indie label Case Studio. The band’s albums are distributed by MyMusic.